You are using an outdated browser. Please upgrade your browser to improve your experience.
by Brent Dirks
January 24, 2014
Typo’s days could be numbered. According to the IDG News Service, BlackBerry has asked a California court to block U.S. sales of the Ryan Seacrest backed iPhone keyboard accessory. As you may remember, BlackBerry filed suit against the company early this month for patent infringement. But the embattled smartphone maker is taking the fight to the next level. In court filings, BlackBerry specifically says the keyboard infringes on two of its patents, U.S. Design Patent 685,775 and U.S. Patent 7,629,964:

"Typo's blatant copying of BlackBerry's keyboard presents an imminent threat of irreparable harm to BlackBerry, and that threat is magnified in combination with the significant market power of the iPhone," BlackBerry said in a proposed motion to the court.

And Seacrest is even mentioned in part of the motion to the U.S. District Court for the Northern District of California:

The company notes he was a well-known, long-time user of BlackBerry devices and cites interviews where he said that the inspiration for the keyboard was trying to bring together the best of the BlackBerry typing experience with everything else an iPhone had to offer. The motion also cites several reviews that note the visual similarity between the Typo and BlackBerry keyboards.

After the original suit was filed, Typo responded saying BlackBerry’s “claims against Typo lack merit and we intend to defend the case vigorously.” Typo is designed to bring a full physical keyboard to the bottom of either an iPhone 5s or iPhone 5. If you’re interested in preordering the Bluetooth accessory while you can, it costs $99. Unless stopped by the court, it’s expected to ship in March. 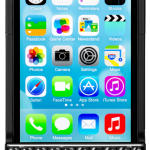