You are using an outdated browser. Please upgrade your browser to improve your experience.
by Bryan M. Wolfe
January 22, 2014
Being a U.S. cellular company first, T-Mobile is now offering its customers payment cards. The banking service is the company’s latest effort to differentiate itself from bigger rivals, according to Reuters. The T-Mobile card is issued by a Bancorp Inc. subsidiary and licensed by Visa Inc. It is similar to a bank account. Using it, customers can direct deposit paychecks and checks from smartphone cameras, make retail purchases, pay bills, and withdraw cash from ATM machines. According to Jackdaw Research analyst Jan Dawson:

This has to be seen today as strictly a competitive differentiator and not a revenue opportunity, though I would expect T-Mobile to offer a broader range of financial services over time, and perhaps try to make some money on those … For now, though, this is another marketing effort from T-Mobile that will cost money rather than make money for the company.

Last week, the No. 4 carrier in the U.S. began offering to pay off any ETF fees of customers coming from Sprint, AT&T, and Verizon, when they switch. The program has since been expanded to users from U.S. Cellular and more than 12 other smaller carriers across the country. See also: T-Mobile And Verizon Announce Wireless Spectrum Swap Worth $2.4 Billion, and Could Sprint Be Looking To Purchase 'Uncarrier' T-Mobile US? 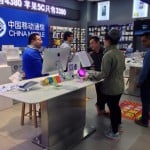 China's 3G Market Is Continuing To Boom, Apple Expected To Benefit In 2014