Bumprz, a set of iPhone-compatible metallic bumpers, promise to save your iPhone’s screen and its antenna if the handset happens to hit the ground. The project can be backed at Kickstarter from as little as $15, offering users a so-called “anti-case” that appears to be as inexpensive as it is effective.

As you can see in the above image, Bumprz are designed to fit around the four corners of your iPhone. Because they protrude ever so slightly from the body of the handset itself, the four bumpers not only save your iPhone’s metallic (and highly scratchable) antenna if the smartphone is dropped, but the product is designed to protect your the handset’s screen, too.

The shock of impact is absorbed by 3M adhesive, according to the product’s creators, meaning your Bumprz-equipped iPhone should be able to withstand a sizable drop without coming off too badly. Don’t believe us? Check out the below video:

Impressive, right? Unbelievably, the four small bumpers indeed protect their iPhone as advertised, even when the handset is dropped from a pretty big height. I know from the harsh reality of personal experience than a caseless (or Bumprz-less) iPhone wouldn’t have fared so well.

Bumprz can be preordered from Kickstarter for $15, provided the project reaches its funding goal of $25,000. Color options include silver and gold, either polished or matte, and the product is compatible with the iPhone 5s and iPhone 5 only.

For more information, including the chance of supporting the project, head over to the Bumprz Kickstarter Web page. 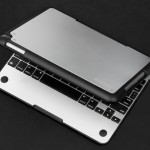 The CruxENCORE Case Turns An iPad Air Into A MacBook Lookalike 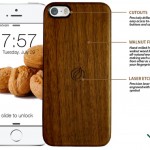