You are using an outdated browser. Please upgrade your browser to improve your experience.
by Bryan M. Wolfe
February 7, 2014
New data sheds some light on which iPads consumers selected during the holiday quarter. It also shows what type of iPad purchases Apple expects to see between now and March. Using data complied by WitsView, Digitimes reports that Apple ordered 30.35 million iPad display panels between October and December. Of these, 17 million were for Apple’s 9.7-inch tablets, including the iPad Air and iPad 2. Another 7.49 million were for the iPad mini with Retina display. The first-generation iPad mini rounded out the list with 6 million. In January, Apple announced record iPad sales of 26 million units during the holiday quarter. 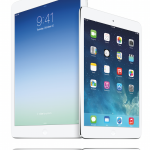 Walmart Drops The Price On The iPad 2, Adds Incentives For Phone Upgrades
Nothing found :(
Try something else