You are using an outdated browser. Please upgrade your browser to improve your experience.
by Bryan M. Wolfe
February 6, 2014
In three years, tablets are expected to represent 75 percent of the mobile computing market. This would come less than a decade after Apple welcomed us to what Steve Jobs called the “post-PC” world. According to NPD DisplaySearch, 455 million tablets will be bought each year by 2017. Those tablets will be a little bit less expensive than the ones on the market today, with an average price of $296 compared to $311. At the same time, sales of standard notebook PCs will drop, while those for ultra-slim PCs will gain slightly. In 2013, 315 million tablets were shipped worldwide, which accounted for 65 percent of the market. Besides offering lower prices, companies will entice future tablet buyers by offering oxide, LTPS, AMOLED, and other emerging screen technologies, as well as 8.4-inch, 10.5-inch, and other new sizes. These changes will “give brands increased flexibility to offer more differentiated products to consumers.” 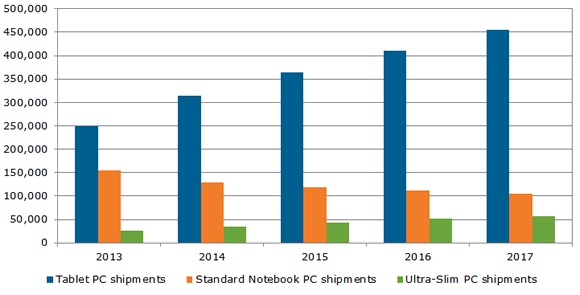 Emerging regions will account for an increasing share of worldwide mobile PC shipments, growing from 57 percent, or 274 million in 2014, to 62 percent, or 385 million, by 2017. Tablet PCs will account for 70 percent of mobile PC shipments to emerging regions in 2014. Nearly half of these devices will be offered for less than $200. NPD senior analyst Richard Shim notes "Momentum for the tablet PC market is in full swing as they have become the dominant mobile PC form factor. Competition is expected to increase as traditional notebook PC brands, including Lenovo, HP, and Dell update their product portfolios to emphasize tablet PCs.” Earlier this week, a Canalys survey showed the worldwide PC market grew 17.9 percent during the holiday quarter, when adding tablet and PC shipments. Tablets grew 65.2 percent year over year to reach 76.3 million units. Excluding tablets, shipments declined 6.9 percent. Given that the iPad remains the top-selling tablet line in the world, all of this sounds like great news for Apple. To stay on top, however, Cupertino will need to continue innovating, and expand its iPad line. Case in point is the likely arrival this year or next of the "iPad Pro." See also: Apple's 'iPad Pro' Could Arrive In September, Apple Isn't Planning The Imminent Launch Of A Big 'iPad Pro,' Analyst Argues, and CES: As Apple 'iPad Pro' Rumors Grow, Samsung Announces Two Large Tablets. 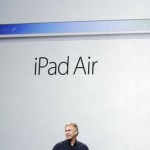 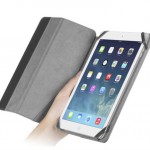 It's Easier To Hold Your iPad Air With Chil's Notchbook On Board
Nothing found :(
Try something else