You are using an outdated browser. Please upgrade your browser to improve your experience.
by Brent Dirks
February 28, 2014
Update: Apple has now said the $1 billion sales figure includes TV and movie content along with actual Apple TV hardware. The Apple TV is quickly turning into more than just a hobby. At the annual shareholder meeting today at the company’s headquarters in Cupertino, Calif., CEO Tim Cook said that the device racked up sales of more than $1 billion in 2013. And according to Reuters, Cook said it is harder to use the dreaded h-word when talking about the device:

"It's a little more difficult to call it a hobby these days," Cook told shareholders at the company's headquarters in Cupertino.

At a $99 retail price, that means Apple sold somewhere around 10 million boxes in 2013. That’s more than double the 5 million units sold in 2012. Apple is expected to unveil a major upgrade of the device as early as next month. The next-generation box will reportedly offer true gaming and iOS 7 controller support, an integrated AirPort Express module, and a built-in TV tuner. And in an interesting move, Apple is offering a $25 iTunes Gift Card to users who purchase the current version of the device. The offer is good until Wednesday, March 5, and you’ll need to buy the Apple TV from an Apple Store or the company’s online site. We’ll update you with any other information from the Q-and-A session with Cook and other Apple executives later in the day. 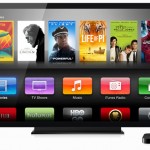