You are using an outdated browser. Please upgrade your browser to improve your experience.
by Brent Dirks
February 28, 2014
In a limited time promotion, Apple is offering a $25 iTunes Gift Card with an Apple TV purchase. The offer is good through Wednesday, March 5. You’ll need to make the purchase at an Apple Store or Apple's online store to receive the gift card. Along with any movies or TV shows, the card can also be used for apps, music, and books. The complete terms and conditions can be found here. Since the box normally retails for $99, the gift card basically cuts the price to $74. Apple is seemingly offering the discount to help clear the shelves of current models before the refreshed box is introduced, which could be as early as next month. And it looks to be a major upgrade. The next-generation Apple TV will reportedly offer true gaming support, an integrated Airport Express module, and even a built-in TV tuner. While Apple was reportedly in talks with Time Warner Cable regarding some type of new partnership for the device, Comcast’s purchase of the cable company might scuttle the deal. For other news today, see: Apple Is About To Make The Touch ID On The iPhone 5s Smarter, OS X 10.9.2 Has Broken AirPlay For Some Users, and Apple's Website Is Now Advising Developers On How To Design For iOS 7. 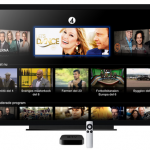 Apple TV Adds New TV4 Play Channel For Viewers In Sweden
Nothing found :(
Try something else