The folks at Intelliborn have launched IntelliScreenX for iOS 7 in the Cydia Store, providing iOS device users with the chance of greatly enhancing their Lock screen. You can pick up the package free of charge for three days, after which a fee of $9.99 must be paid (although previous owners of IntelliScreen do qualify for a free download or discount).

We've talked about IntelliScreen before, but if you're not familiar with the jailbreak tweak, it essentially adds a slew of additional features to both the iOS Lock screen and Notification Center. You can configure the package from within a dedicated preferences pane that's added to the Settings app, and once enabled, users can perform a number of tasks without actually having to unlock their iOS device.

For example, detailed weather information is displayed at the IntelliScreenX Lock screen, and notifications from services installed on your iOS device – ranging from Facebook to Twitter, RSS, and email – appear and auto-cycle.

Upcoming Reminders will be displayed, and with a swipe to the right of their Lock screen users can compose new messages, access Twitter, post to Facebook, or check on their RSS feeds. The same options are also available from Notification Center, too.

Besides providing users with the option of enabling or disabling IntelliScreenX, the preferences pane also allows jailbreakers to configure activated services, to choose whether the package is enabled at the Lock screen (since this comes with its share of security concerns), and to change how the package appears. Every time you respring your iOS device, you'll need to re-enter your passcode; however, IntelliScreenX for iOS 7 does provide users with the option of accessing personal information at the Lock screen without having to enter a passcode or scan a fingerprint, and as such it's important to ensure that the package's options have been configured carefully.

IntelliScreenX for iOS 7 can be downloaded and enjoyed free for three days, after which users may need to pay for the package.

If you owned IntelliScreenX for iOS 6, you'll get the update entirely free of charge; if you used IntelliScreenX, then the update will set you back $4.99, however. For users of the original IntelliScreen, the new package can be unlocked for $7.99, and jailbreakers new to Intelliborn's package will need to pay $9.99 for the software.

See also: Cydia Tweak: Auxo 2 Gets Shown Off In A Couple Of Vines, Marvel Teams Up With GlitchSoft For Uncanny X-Men: Days Of Future Past Game, and Shelf Control: Presenting BookAwardz And Its Listing Of Award-Winning Books. 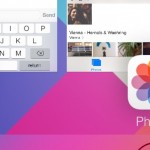 Cydia Tweak: Auxo 2 Gets Shown Off In A Couple Of Vines 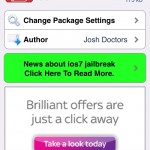