You are using an outdated browser. Please upgrade your browser to improve your experience.
by Brent Dirks
March 12, 2014
Paper is heading into the modern age of iOS design. Developer FiftyThree has announced a major update to the popular drawing app. Most importantly, version 1.6.1 will feature a design that takes advantage of iOS 7:

Paper is now built for iOS 7. It’s the same Paper creators around the world know and love with a fresh new look to improve readability to keep you in your creative flow. You’ll find faster menus, simplified icons, lighter colors, journal covers that pop, custom typefaces, and overall improved readability. It combines the emotional power of metaphor and the functional clarity of clean design. In other words, we’ve polished every pixel.

And with the update, when a user zooms in, their drawing tools will also follow along. Draw, Color, Erase, and Blend will automatically adjust their size for finer control. Finally, the dot size in the Draw and Erase tools is now linked to how long the screen is pressed. So a quick tap will make small dots while larger ones can be created with a longer press. Designed for the iPad/iPad mini, Paper can be downloaded now on the App Store for free. The update isn’t live yet, but should be appearing momentarily. FiftyThree made news early last month when it asked Facebook to change the name of its new app with the same name. The social networking giant refused to honor the request, and the developer backed up its talk by filing a trademark for the word “paper” with the United States Patent and Trademark Office. 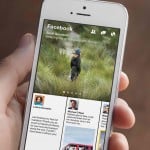