You are using an outdated browser. Please upgrade your browser to improve your experience.
by Brent Dirks
April 8, 2014
Amazon’s video streaming service is on fire in the United States. The retailer announced today that streams on Prime Instant Video have nearly tripled compared with a year ago. And according to a recent study from Qwilt, Amzaon has passed both Apple and Hulu in the volume of video streaming traffic from U.S. broadband subscribers. Since last March, Amazon has made the move to the No. 3 video site on the Internet, trailing Netflix and YouTube:

Today, only Netflix and YouTube produce more total online video traffic in the US. Amazon's traffic volumes, as measured by Qwilt in March of 2014, increased by 94% over the previous 12 months. In some US operator networks, between March 2013 and March 2014, Amazon’s streaming video traffic increase was nearly 300%.

All the growth has come before Amazon even introduced its $99 Fire TV set-top box. Officially unveiled last week, the device heavily features Amazon’s video services while offering voice-powered search and full support for games. Our own Bryan M. Wolfe offered his assessment of the device in a full review yesterday. While he doesn’t think it’s a game changer, he says it is a step in the right direction:

If you are currently an Amazon Prime subscriber and get most of your digital content through them, buying an Amazon Fire TV is really a no brainer — especially if you don’t already have a TV streaming device. If most of your content is purchased through Apple’s iTunes, however, there isn’t much of a reason to buy Amazon’s device at this time. This is especially true given that the next Apple TV could be released as early as June.

I purchased a Fire TV immediately after it was announced, and have enjoyed the device so far. Especially from Amazon's video sources, the streams have been fast and crystal clear. Hopefully it will tide me over until Apple finally decides to release its long-rumored Apple TV revamp. 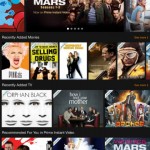 At Long Last, Amazon Instant Video Gets Updated And Redesigned For iOS 7