You are using an outdated browser. Please upgrade your browser to improve your experience.
by Brent Dirks
May 13, 2014
Bidding has ended for Tim Cook’s second CharityBuzz auction. An unnamed person won with a final bid of $330,001. For that price, the winner and a guest will get to have a one-hour lunch with Apple’s CEO at the company’s Cupertino, California headquarters. While the cost of the lunch is included, the winner will have to pay their way to California. Earlier this month, via Twitter, Cook also announced an extra benefit for the auction winner. They will be a VIP guest at an Apple event.

Join me for lunch and advance human rights @rfkcenter.You can also be my VIP guest at an Apple event. https://t.co/02aONVPQM9 #RFKauction — Tim Cook (@tim_cook) May 10, 2014

All proceeds will be donated to the RFK Center for Justice and Human Rights. According the charity’s site, “The RFK Center strives to achieve Robert Kennedy's vision of a just and peaceful world by partnering with human rights leaders, teaching social justice and advancing corporate responsibility.” This is the second item that Cook has donated via CharityBuzz. Back in 2013, a coffee meeting with Apple's head went for a winning bid of $610,000. After someone used a stolen credit card to place a bid in last year’s auction, CharityBuzz instituted additional security methods to identify bidders. For other news today, see: LG Is Set To Launch Two New Wearable Devices That Work With Apple's iOS, Apple's iPhone 4, iPad 2 Probably Won't Support iOS 8, and AppAdvice International: Apple's Japan Sales Chief Switches To North America. 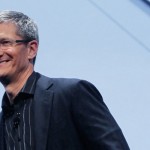