Apple might have yet to announce its long anticipated “iWatch,” but LG isn’t planning on holding back. The company is indeed bringing its own smart watch – called “G Watch” – to the market later this year, and in a recently published promotional video LG has provided users with a closer look at the upcoming product.

Though hardware details aren’t disclosed, the video (embedded below) does provide an overview of how the G Watch is going to look and function. As you can see, LG’s smart watch runs Android Wear, the wearables-based software development kit (SDK) that Google first unveiled in March, and key features include “Okay Google” support and health and fitness functionality.

Here’s the new G Watch video, see what you think:

HTC, Motorola, and Samsung are all said to have Android Wear-powered devices in the works, too. Fashion brands like the Fossil Group are also getting in on the SDK.

Apple, on the other hand, has reportedly been developing its own iWatch device for some time. The rumored product is also expected to offer health and fitness functionality while integrating with various elements of iOS and OS X.

Most recently, we’ve been told to expect an iWatch announcement later in the year (rather than at WWDC), and a report in April claimed that Apple’s iWatch had entered production “in small quantities.”

In the meantime, see: Could Apple’s Bigger, 5.5-Inch iPhone 6 Also Feature NFC?, Cydia Tweak: KeyShortcut Pro Adds Custom Keys To The Popular Package, and Report: Apple Is Still Finding It Tough To Break Up With Samsung. 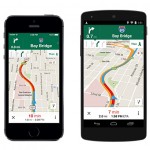