You are using an outdated browser. Please upgrade your browser to improve your experience.
by Brent Dirks
June 18, 2014
Apple may find a way to include another sensor in the upcoming “iPhone 6.” According to 9to5Mac, references in iOS 8 and XCode 6 point to hardware with an integrated barometer. The CoreMotion APIs in the beta software offer a glimpse into a new framework that needs next-generation devices. A built-in barometer could open up a number of possibilities. Probably the two biggest include altitude tracking and weather forecasting. With a barometer, apps could help users determine their current altitude or change in altitude, like when on a run. A barometer is also used to help forecast upcoming weather changes because of changes in air pressure. Along with the “iPhone 6,” Apple could also include a barometer in the next generation of iPads and the long-rumored “iWatch.” The most recent rumors indicate Apple could unveil an iPhone with both a 4.7-and 5.5-inch screen. Both sizes are pictured in the above mockup photo. It is expected to be officially unveiled in September right along with iOS 8 itself. For other recent news today, see: Apple Unveils A Less Expensive iMac, But Still No Retina Display Model, Amazon Officially Unveils The Fire Phone To Compete Against Apple's iPhone, and Should You Upgrade To Apple's iOS 8 Beta 2 Or OS X Yosemite Update 1.0? 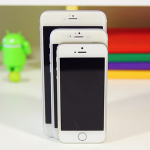 Good And Bad News About Apple's 'iPhone 6,' 'iWatch'
Nothing found :(
Try something else