You are using an outdated browser. Please upgrade your browser to improve your experience.
by Joe White
June 4, 2014
It's good news for our Canadian readers as Rogers Wireless, Canada's largest wireless carrier, has become the second carrier to confirm support for Apple's Wi-Fi calling feature in iOS 8. The news comes following a recent blog post from "uncarrier" T-Mobile, in which the U.S. carrier also confirmed support for the feature. Though we've yet to hear from the United States' AT&T, Verizon, or Sprint, Rogers recently told the folks at iPhone in Canada that it'll indeed support Wi-Fi calling on its network. In an email statement, Rogers said:

We’ll support the iOS 8 Wi-Fi calling feature when it becomes available in Canada. In the meantime, Rogers customers using the Rogers One Number service on their computer, tablet or smartphone can already make calls over Wi-Fi. They can video chat with other Rogers One Number users or call any Canadian number for free, no matter where they are. For more info on Rogers One Number http://Rogers.com/OneNumber.

Neither Telus or Bell, two of Canada's other big carriers, responded to the publication's request for comment -- though we'll let you know if this changes. Wi-Fi calling is a feature iOS 8 users are going to appreciate for a number of reasons. Besides being more battery efficient than traditional cellular calling while also reducing the consumption of voice minutes (if you're on a limited plan), Wi-Fi calling -- like FaceTime Audio -- offers smartphone owners a clearer, more crisp voice calling experience. Plus, as iPhone in Canada notes, Wi-Fi calling will also help Canadians reduce roaming fees when they travel to the United States. We'll let you know as and when more carriers (both in the United States and overseas) confirm support for the feature. In the meantime, see: In iOS 8, Apple Has Ditched Yahoo For The Weather Channel, Halfbrick Soft-Launches Candy Crush Saga-Like Match–3 Puzzle Game Yes Chef!, and Apple’s HealthKit Faces Complaint From Health Software Startup Of The Same Name. 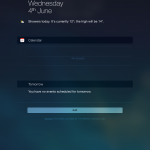 In iOS 8, Apple Has Ditched Yahoo For The Weather Channel

Apple's HealthKit Faces Complaint From Health Software Startup Of The Same Name
Nothing found :(
Try something else