You are using an outdated browser. Please upgrade your browser to improve your experience.
by Joe White
June 11, 2014
It looks like progress on Apple's futuristic "Campus 2" is continuing as planned, with a small wall recently having appeared around the foundation of the in-development spaceship-like campus. The news came in a Twitter update from KCBS reporter Ron Cervi (@Sky1Ron), which included the above aerial image of Campus 2 and read:

Progress on #ApplesNewHQ, a small wall around the foundation of the spaceship has sprouted.

This most recent image of Apple's new campus comes a month after a similar report noted that the foundation of the futuristic building was visible from the air. Years following its original proposal in October 2011 by the late Steve Jobs, Cupertino City Council granted final approval on Campus 2 in November, and construction has been underway since. Here's an earlier image of the campus: Besides offering a 120,000 square foot auditorium and space for its Cupertino-based employees, Campus 2 has also been designed to source 70 percent of its energy from solar and fuel cells. In order to oversee its sustained environmental efforts, Apple indeed hired a new renewable energy manager back in April. The first phase of Campus 2's construction is expected to be completed in late 2016. We'll keep you updated with further information as we receive it. Via: 9to5mac 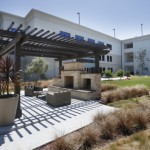 Apple Is Expanding To A Bigger Campus In Sunnyvale, California