You are using an outdated browser. Please upgrade your browser to improve your experience.
by Joe White
June 17, 2014
Wayward Souls, the much-loved indirect sequel to Rocketcat Games' Mage Gauntlet, is set to receive its first major update in the near future. The update, which has already been sent to the App Store approval team, makes a number of changes to the app -- including the addition of a brand new dungeon. According to a recently published change-log for the update (via TouchArcade), this new dungeon is called "The Labyrinth." It promises "20 floors of pain, and the conclusion of the stories of the current six characters," Rocketcat explains. This new dungeon also comes with its own brand new boss (little information is shared concerning this character, however), and a wide-ranging number of more general improvements are also appearing in the update, including: Rocketcat also notes that its Warrior, Rogue, Mage, Adventurer, Spellsword, and Cultist character classes are each getting a series of balance changes, and promises that further alterations to these classes are set to appear with Wayward Souls' second major update. This second update will also bring MFi (Made for iPhone) gamepad support, along with at least two new dungeon modes (including an "Endless" mode), boss health bars, and "other stuff we didn't get to do in the first update," according to Rocketcat. If you're not familiar with Wayward Souls, the rogue-like adventure game is definitely worth taking for a spin. Back when the application was released we awarded it the accolade of being our AppAdvice Game of the Week, with my colleague Christine concluding that Wayward Souls is a "must-have" title. It's also worth noting that Rocketcat is planning on increasing the price of Wayward Souls by one dollar with each update. As such, now would be a great time to purchase the application if you've so far been unsure. Up until the app's update launches on the App Store, Wayward Souls can be downloaded for $4.99 and it's optimized for the iPhone, iPad, and iPod touch. We'll let you know once the game's incoming update is available to download. [gallery] 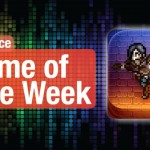 AppAdvice Game Of The Week For May 2, 2014
Nothing found :(
Try something else