You are using an outdated browser. Please upgrade your browser to improve your experience.
by Brent Dirks
July 11, 2014
A little more than a month after officially unveiling the new Swift programming language for iOS and Mac OS X, Apple has just introduced a new blog for developers. The Swift team at Apple authored the first post:

This new blog will bring you a behind-the-scenes look into the design of the Swift language by the engineers who created it, in addition to the latest news and hints to turn you into a productive Swift programmer. Get started with Swift by downloading Xcode 6 beta, now available to all Registered Apple Developers for free. The Swift Resources tab has a ton of great links to videos, documentation, books, and sample code to help you become one of the world's first Swift experts. There's never been a better time to get coding! - The Swift Team

The rest of the post goes into detail about Swift compatibility information. One of the bigger announcements at WWDC, Swift is designed to be faster, clearer, and more computationally effective than Objective-C. Apple has also released a free Swift programming guide on the iBookstore. The 500-page manual offers a detailed guide for each feature and a formal reference for the language. Developers quickly took to the new language. Just 24 hours after being unveiled, a developer recreated the popular Flappy Bird app in Swift. For other news today, see: Apple joins the Obama administration's new 'SupplierPay' program, The Apple 'A8' processor could push processing speeds to 2.0 GHz or more, and Apple posts Safari update for devs, blocks older versions of Flash due to security issue. 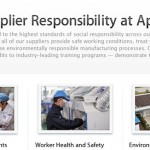