You are using an outdated browser. Please upgrade your browser to improve your experience.
by Brent Dirks
July 24, 2014
What’s better than an "iPhone 6" mockup? How about an "iPhone 6" clone that happens to be a fully functional handset. Our friend Dom Esposito over at 9to5Mac has pointed to an interesting YouTube video from Danny Winget that examines the Wico6. Instead of actually being an iOS 8 device, the handset is running a heavily skinned version of Android. But the clone producers definitely did their homework. Here’s the complete video. Click here if you can’t see it. The site also has the lowdown on the clone's specs:

Just in case you were curious, this device is powered by a 2.4GHz quad-core MediaTek processor, 2GB of RAM, 8GB of internal storage, and has a 4.7-inch display with a resolution of 960 x 540 (234 ppi). Nothing impressive, but apparently it gets the job done.

The actual "iPhone 6" is expected to be unveiled in September. While the 4.7-inch version is a strong lock to hit the market, we’re still getting mixed signals about the rumored 5.5-inch version. A recent report said Apple is considering launching the smaller handset before the larger version. Both versions are expected to offer a sapphire coated screen, a faster A8 processor, an improved camera, and more. For other news today, see: Apple explains how to fix code already redeemed error for the Yosemite public beta, Instagram appears to have accidentally leaked 'Bolt,' a Snapchat competitor, and Vessyl, the cup that tracks what you are drinking rakes in $1 million in preorder sales.

Apple can't hide the fact they are about to launch the 'iPhone 6,' 'iWatch' 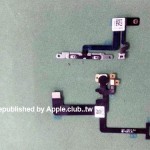 Parts for Apple's bigger, 5.5-inch 'iPhone 6' are shown off in new images
Nothing found :(
Try something else