Longtime Apple watcher Jim Dalrymple was intrigued after Apple announced earlier today that the anticipated special event on Tuesday, Sept. 9 will be held the Flint Center for the Performing Arts in Cupertino, Calif.

Being in the area, he went over to the center and found something interesting. Apple is constructing its own building on the grounds. Dalrymple believes it could be the hands-on area for attendees to look at the new products after the event.

He was able to snap a few pictures of the construction, but reported that security was obviously tight. 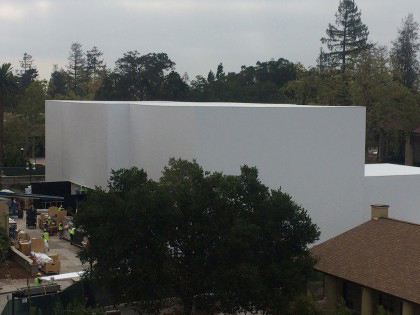 Another view of the construction at the Flint Center.

On the campus of De Anza College, the Flint Center is a surprising location for the event. It was first used by Apple in 1984, when Steve Jobs announced the original Mac, and last used for a media event all the way back in 1998.

And the center can accommodate more than 2,400 people, which is a big step up from other venues like the Yerba Buena Center for the Performing Arts, which can just seat 757 people. Apple’s Town Hall, which served as the site for the iPhone 5s and iPhone 5c unveiling in 2013, seats even less.

So what does all this mean? Simply, Apple is planning for some huge announcements.

No new iOS devices have been unveiled since late October 2013, more than 10 months ago. The next-generation iPhone will take center stage, with Apple unveiling models with a 4.7-inch and 5.5-inch screen.

I think this large venue makes it clear that Apple also plans to introduce the “iWatch” during the event and wants as many people there live to see it. I’m still convinced, because of the lack of parts leaks, that it may be months before the device will actually hit the market. But Apple wants to build the excitement for the new product category as soon as possible.

It also makes sense that Apple needs a larger space to show off HomeKit, and maybe even some more CarPlay integration.

Stick with us as we cover everything leading up to the event and all of the important news during the announcement.

Apple planning on unveiling 'iWatch' alongside 'iPhone 6' ... but only as an accessory
Nothing found :(
Try something else