T-Mobile is reportedly scheduled to discount certain iPhone models by up to $50 starting tomorrow, Aug. 27.

The markdown comes just about a couple of weeks before Apple’s anticipated unveiling of its next-generation smartphone on Sept. 9. Dubbed “iPhone 6,” the upcoming device is rumored to come with larger displays in 4.7-inch and 5.5-inch models.

Ahead of the introduction of iPhone 6, Walmart last week began applying significant discounts on current iPhone models. As a result, the retail chain now offers the iPhone 5s at just $79 or the iPhone 5c at just $0.97 with a two-year contract. Interestingly, Walmart’s iPhone deals are offered through AT&T, Sprint, US Cellular, and Verizon, and not though T-Mobile. 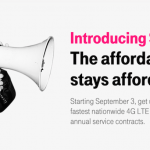 Ahead of the 'iPhone 6' launch, Sprint unveils a $60 per month unlimited plan
Nothing found :(
Try something else