That was quick … as it should have been.

Apple has released iOS 8.0.2, just a day after it promised a fix for the botched iOS 8.0.1 update it pushed out earlier.

The ill-fated update to the latest major iteration of Apple’s mobile operating system was meant to deliver a number of minor improvements. But it actually resulted in loss of cellular service and Touch ID functionality on iPhone 6 and iPhone 6 Plus.

Having been made aware of the critical issues, Apple promptly pulled the update. It also promised to release iOS 8.0.2 both as a replacement of and a fix for iOS 8.0.1 in “the next few days” and encouraged affected users to downgrade to iOS 8.0 in the interim.

Well, iOS 8.0.2 is already here. And it indeed fixes iOS 8.0.1′s cellular network connectivity and Touch ID snafu on iPhone 6 and iPhone 6 Plus. It also brings the same set of improvements and bug fixes originally intended to be delivered by iOS 8.0.1, most notably including a fix for a bug that has been holding back the release of HealthKit-integrated apps on the App Store:

To download iOS 8.0.2 over the air, go to Settings > General > Software Update on your iOS device. You can also install the update to your device by connecting it to iTunes on your computer. 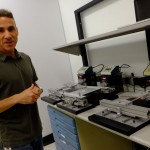 Apple offers inside look at iPhone 6 reliability testing lab in response to 'Bendgate' issue
Nothing found :(
Try something else