Not surprisingly, demand for the iPhone 6 and iPhone 6 Plus seems to be off the charts.

In a new statement to Re/Code, Apple says the overnight preorders set a new record:

“Response to iPhone 6 and iPhone 6 Plus has been incredible with a record number of preorders overnight,” Apple told Re/code.

Apple didn’t specify exactly how many units were ordered.

Many were able to place their orders directly through the Apple Store app or through Sprint, AT&T, or Verizon. But all of those outlets were slow and unreliable as well.

As we reported earlier this morning, the larger iPhone 6 Plus has sold out for delivery on launch day, which is next Friday, Sept. 19. Apple’s site is listing shipping times for all models in three to four weeks.

The news is a little better for the iPhone 6. You can still order the smaller handset for delivery next Friday. Every color and size is still available to order through Apple.

If you missed out on an iPhone 6 Plus, the best bet would be to stand in line at the nearest Apple Store on launch day. But it’s unknown how many handsets Apple will have in stock.

Were you able to place a preorder last night? 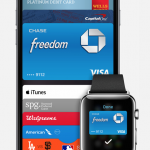 Merchants and apps that will accept Apple Pay
Nothing found :(
Try something else