Apple may next be going for the gold with the MacBook Air.

We’ve previously reported on the next-generation laptop that will probably be thinner and feature Intel’s Core-M Broadwell processor. And A Tech Website is suggesting an interesting new feature for the 12-inch model:

Those would be the same three color options for the iPhone 6 and iPhone 6 Plus.

Three color choices, especially the gold version, sound quite crazy for a MacBook Air. But MacRumors has also heard that Apple is designing the computer with different “special edition” color options.

While more than a few derided the gold color choice for the iPhone 5s, it turned out to be a massive hit for Apple. I’m sure it will be a hot seller for both of the new iPhone 6 models as well. The high-end Apple Watch also features an 18-karat gold case.

But a gold MacBook Air, really? Would you be seen using a blinged out Mac? 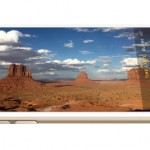 Which carrier is best for your new iPhone 6 or iPhone 6 Plus upgrade?
Nothing found :(
Try something else