While it is well known that security surrounding Apple’s major events is top-notch, a new report from Cult of Mac details some of the extreme precautions that are being taken for the unveiling of the next-generation iPhone and wearable device.

The event begins tomorrow at 10 a.m. PDT at the Flint Center on the campus of DeAnza College in Cupertino, Calif.

And the security is beyond tight. The site says that Apple has wired the center with a new state-of-the-art security system to lock down access and protect leaks:

The auditorium is crawling with 24-hour security personnel. Anyone working at the massive show, from caterers to construction staff and technicians, is required to submit their phones to Apple’s security team. The phones’ cameras are being covered in special tamper-proof tape, which changes color if removal is attempted.

“If it changes color, we’ll be fired on the spot,” said one person who is working at the show but asked to remain anonymous.

Along with the camera precautions, Apple security staff members are apparently looking at phones to find any possible unauthorized messages or pictures of the event:

“We were told that we should erase anything embarrassing from our phones because security will be going through them with a fine-tooth comb,” the person said.

As we’ve seen, Apple is planning for a huge event, even constructing the pictured building at the center for the unveiling.

And according to one source that talked to Cult of Mac, Apple flew in special contractors from the U.K. to work on the building’s exterior. Those workers aren’t allowed to have contact with any other employees.

It’s shaping up to be a huge day for Apple with the introduction of two new iPhones and the long-rumored “iWatch.” Apple will offer a live stream of the event at its site. AppAdvice will also be there live to cover the news as it happens. 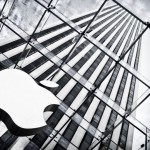 What we expect from Apple’s Sept. 9 event 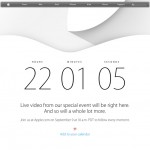 Apple’s home page now features a countdown to tomorrow’s special event
Nothing found :(
Try something else