Apple has been busy today on the software front. After releasing the second beta of iOS 8.1 to developers, the company has followed up with the second GM candidate of OS X Yosemite. Registered developers can download the software directly from the Mac App Store.

The first golden master candidate arrived exactly a week ago.

We’ll let you know if we find any major changes in the software.

With this software release, Apple is apparently inching closer to unveiling OS X 10.10 to the public. Apple will reportedly discuss the rollout plans for the free software update during a special media event next week on Thursday, Oct. 16.

OS X Yosemite features a major visual overhaul from previous versions of the desktop OS. Much like iOS 7, it features a flat and modern look. The software also offers some tight integration with iOS 8 devices, including Handoff and Continuity. 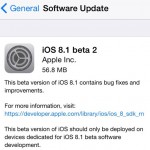 Apple Pay is the 'player to beat' in the mobile wallet space
Nothing found :(
Try something else