After informing PCalc developer James Thomson yesterday that he must remove the iOS 8 Notification Center calculator widget from the app, Apple has reversed course.

According to TechCrunch, Apple will allow the app to remain in the App Store as is and will allow other calculator widgets as well. Here’s more from the story:

But now we’re hearing that Apple is changing its course. The PCalc app and widget will remain in the App Store, and all calculator-type widgets will be allowed as well, an Apple spokesperson has confirmed to us.

From our understanding, the calculator use case was not one that Apple had anticipated, which is why an App Store reviewer originally explained to Thomson that he would need to adjust the app, or risk being pulled from the App Store.

I’m glad to see that Apple reversed course and will allow calculator widgets in the Notification Center. At least for me, the different widgets have been one of the top new features in iOS 8, and I’m looking forward to seeing what else developers can do with the extra-added freedom.

A universal app designed for the iPhone/iPod touch and iPad/iPad mini, PCalc can be downloaded now on the App Store for $9.99.

If you’re interested in trying out the widget, you can also download PCalc Lite for free. The extra features can be unlocked with separate in-app purchases.

Back in September, Apple decided to pull another app that offered an interesting widget. With Launcher, users were able to launch apps directly from the widget. But Apple informed Cromulent Labs that the functionality was not allowed.

For other app news today, see: Skype for iPhone updated with photo saving and deletion, faster chat loading and more, Cut the Rope: Time Travel goes way back to the magnetic age of the Industrial Revolution, and Spotify finally brings its dark theme and Your Music collection to its iPad app. 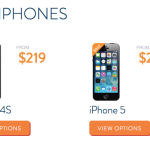 Gazelle launches a Certified Pre-Owned service for iPhone and iPad
Nothing found :(
Try something else