You are using an outdated browser. Please upgrade your browser to improve your experience.
by Bryan M. Wolfe
October 15, 2014

Are we about to see the first MacBook Air with a Retina display? The rumor mill is decidedly conflicted on the eve of Apple’s next media event.

Earlier in the week, Re/Code said that Apple was working on a Retina display MacBook Air. The only problem? Its sources said “the company’s latest reimagining of the ultralight laptop won’t be shown off at its Thursday event.”

Last week, the site said that a 12-inch Retina display MacBook Air was in production. Like Re/Code, however, they said not to expect the new laptop to be unveiled this month.

On Wednesday, DigiTimes changed its story. They are now saying that shipments on the new laptop “have begun in small volumes and large-volume shipments will begin in November, according to Taiwan-based supply chain makers.”

Apple is also planning to upgrade the technologies used for printing its logo onto devices and will use laser cutting and unique embedded technologies to make the logo 3D-like and shine at the edges. All Apple’s products will feature the new logo in 2015, starting with the next-generation iMac, the sources detailed.

Re/Code has much better sources at Apple. By contrast, Taiwan-based DigiTimes can rightly claim that they have Apple suppliers as contacts. With that being said, I don’t expect that we’ll be seeing a new MacBook Air revealed tomorrow, Oct. 16. Instead, I would expect Apple to wait until early next year to announce a refresh, perhaps on the day it also announces a release date for the Apple Watch.

This doesn’t mean tomorrow’s event won’t feature another one of Apple’s signature “one more thing” announcements. The more likely candidates here are the long-rumored 12.9-inch “iPad Pro” or the first Retina display iMac.

Apple’s iPad-centric media event begins on Thursday at 10 a.m. PDT. As usual, AppAdvice will provide full coverage and analysis. We hope you can join us. 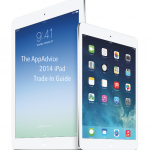 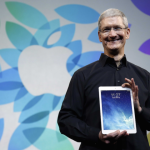 Apple's 'iPad Air 2' to have limited initial availability, Retina iMac to ship by year's end
Nothing found :(
Try something else