Leonardo DiCaprio is not going to win his elusive Oscar as Steve Jobs after all.

That’s because the “Titanic” and “Inception” star has backed out of playing the late Apple cofounder in the upcoming Sony Pictures film based on Walter Isaacson’s “Steve Jobs” biography and directed by “Slumdog Millionaire” helmer Danny Boyle. According to The Hollywood Reporter:

The actor, who had been in talks with Sony to play the late Apple Computer co-founder for director Danny Boyle, has bowed out to instead shoot The Revenant. But instead of making the untitled Jobs biopic right after, as had been hoped, DiCaprio has removed himself from the project altogether. Sources say after DiCaprio finishes The Revenant, which began shooting this week, he plans to take a lengthy break from acting.

DiCaprio was first reported to be in talks for the role back in April.

Also back then, David Fincher of “Fight Club” and “Zodiac” fame was said to have been tapped by Sony to direct the biopic. But he left the project since the production company was reportedly unhappy with the director’s compensation and control requests.

Following DiCaprio’s departure from the project, the title role is once again up for grabs. Christian Bale (“The Dark Knight Trilogy), who was Fincher’s top choice, is said to be among the actors being considered by Sony for the role, along with Ben Affleck (“Argo”), Matt Damon (“The Bourne Trilogy”), and Bradley Cooper (“Silver Linings Playbook”).

The biopic is written by Aaron Sorkin, who won an Oscar in 2011 for the screenplay of Fincher’s “The Social Network.” Sorkin’s script is said to be divided into three 30-minute scenes, with each scene take placing behind the scenes of a major product launch, e.g. the original Mac, the NeXT cube, and the iPod.

The film is not to be confused with last year’s poorly received Steve Jobs biopic, “Jobs,” starring Ashton Kutcher in the title role. 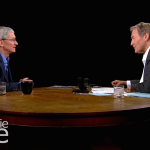