What if you could carry a virtual reality (VR) device everywhere you go since it’s attached to something that you already carry with you? That’s essentially the pitch of the startup behind Pinć.

Created by the Toronto-based Cordon Development Labs, Pinć (pronounced “pinch”) is a protective case that’s compatible with the iPhone 6 and the iPhone 6 Plus. More importantly, it’s a headset that provides access to a mobile VR platform capable of supporting content creation, content consumption, and even e-commerce through spatial interaction.

As showcased in the promotional video below, Pinć enables “Minority Report”-style spatial interaction through multi-touch gestures performed using a pair of finger tacks or “pinchers,” which it tracks using the iPhone’s camera. Additional head-tracking and movement are captured by Pinć in conjunction with the iPhone’s Apple M8 motion coprocessor.

Pinć apparently has far more than a pinch of potential. But it’s currently in its prototype stage. To ensure its fruition and release in the mass market, Cordon has launched a crowdfunding campaign on Indiegogo, in hopes of raising C$100,000 (about US$89,000) in one month. The company has also begun accepting preorders through its website for the C$99 (US$88) Pinć Discovery Edition.

Cordon plans to funnel support from backers through key areas in the development of Pinć, including the refining of its form factor, the improvements of its pinchers, and the release of its software development kit.

Pinć is expected to begin shipping by next spring.

See also: This week in accessories: Lifeproof Fre for the iPhone 6, HiRise Deluxe and more.

This week in accessories: Lifeproof Fre for the iPhone 6, HiRise Deluxe and more 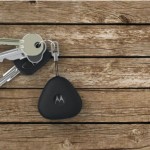 Never misplace your iPhone or keys again thanks to Motorola’s new Keylink
Nothing found :(
Try something else