You are using an outdated browser. Please upgrade your browser to improve your experience.
by Bryan M. Wolfe
December 23, 2014

As we get ready to say goodbye to 2014, work continues on Apple’s Campus 2, which is slated to be completed by the end of 2016.

Steady progress has been made over the last two months, as the following video from AppleInsider shows:

Earlier this month, building permits obtained by BuildZoom confirmed that Campus 2 will feature an auditorium that costs $161 million and a fitness center which runs $74 million.

Upon completion, the auditorium will be the venue for the company’s special events, including unveilings of next-generation Apple products. As for the fitness center, it will make for a key perk for the company’s employees, especially the more health-conscious ones.

The new campus was first unveiled through renderings in 2011 by Apple cofounder and then-CEO Steve Jobs. It gained final approval from the City of Cupertino in November last year.

Located a mile east of Apple’s current headquarters in Cupertino, California, the circular spaceship-like Campus 2 is designed to accommodate 12,000 employees.

Apple could be prepping a 4-inch 'iPhone 6s mini' 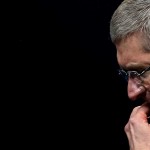 Tim Cook is named CNN's best CEO of 2014
Nothing found :(
Try something else