Earlier this year, Apple announced that new apps submitted from Feb. 1, 2015 on must offer 64-bit support and be built with the iOS 8 SDK.

And in an email sent to registered developers today, Apple said those same requirements will apply to any app updates submitted starting on June 1, 2015.

As we announced in October, beginning February 1, 2015 new iOS apps submitted to the App Store must include 64-bit support and be built with the iOS 8 SDK. Beginning June 1, 2015 app updates will also need to follow the same requirements. To enable 64-bit in your project, we recommend using the default Xcode build setting of “Standard architectures” to build a single binary with both 32-bit and 64-bit code.

If you have any questions, visit the Apple Developer Forums.

Apple’s first device with a 64-bit chip, the iPhone 5s, was introduced last year. Now with the exception of some lower-end devices, like the original iPad mini and the iPhone 5c, most all of Apple’s iOS products now support the technology.

For other news today, see: The debut of the Apple Watch is just one of Circa’s most followed news stories of 2014, Expect huge App Store discounts, app updates in the coming days, and An updated list of the merchants, cards and apps that accept Apple Pay. 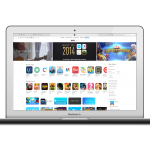