Apple has been hit with a lawsuit over its alleged false advertising of the available storage capacity in its iOS devices.

The lawsuit, filed Tuesday in the northern district of California, says the massive data footprint of the iOS 8 operating software eats into the advertised capacity of Apple’s mobile devices.

The plaintiffs are a couple of iOS device owners from Miami, Florida, named Paul Orshan and Christopher Endara, who wish to have their complaint elevated to class action status under California’s false advertisement laws.

Of course, it’s not unusual for makers of consumer electronics devices to advertise or indicate the total storage capacity of their products excluding preloaded operating systems and apps. Apple, for instance, has been including the “actual formatted capacity less” fine print in its devices’ promotion and packaging.

But in the case of Apple’s iOS devices, the plaintiffs’ attorney, Jonas Mann, argues that “the discrepancy between advertised and available capacity is substantial and beyond any possible reasonable expectation.” For example, as cited by Mann in a court filing, a 16GB iPhone 6 or iPhone 6 Plus actually has about 13GB only of storage available for apps, photos, songs, documents, and other user data.

The suit also takes issue with the fact that unlike many other smartphones and tablets, Apple’s iPhones and iPads don’t support expandable storage via insertable memory cards. Moreover, it challenges Apple’s delivery of advertisements for its paid iCloud online storage service on devices with nearly full capacity.

But, you know, perhaps more than the software’s plethora of features, Apple means the sheer heft of iOS 8 after all in touting it as “the biggest iOS release ever.” 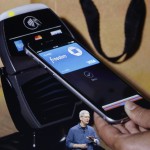 Some Apple Pay users are reporting problems after an iPhone restore
Apple Pay may drive New York City's adoption of mobile payments for parking tickets
Nothing found :(
Try something else