Winter is coming … and so is Telltale’s Game of Thrones.

As promised, Telltale has debuted the full launch trailer for Game of Thrones, ahead of the game’s release later this week.

Game of Thrones is a new game based on HBO’s hugely popular TV show of the same name, which itself is an adaptation of George R. R. Martin’s “A Song of Ice and Fire” epic fantasy novel series.

The game begins toward the end of the TV show’s third season and ends right before the fifth season. However, it focuses on House Forrester, whose members haven’t appeared on the show, but have appeared in “A Dance with Dragons,” the fifth book in the novel series. As noted by Telltale:

This new story tells of House Forrester, a noble family from the north of Westeros, loyal to the Starks of Winterfell. Caught up in the events surrounding the War of the Five Kings, they are thrown into a maelstrom of bloody warfare, revenge, intrigue, and horror as they fight to survive while the seven kingdoms tear themselves apart.

Like Telltale’s Walking Dead: The Game and The Wolf Among Us, Game of Thrones is an episodic graphic adventure game of choice and consequence.

Take a look at the full launch trailer for Game of Thrones:

Stay tuned to AppAdvice or sign up though GamingSoon to get notified as soon as Game of Thrones becomes available on iOS. 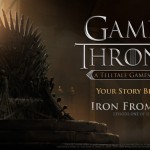 War is coming: Telltale's Game of Thrones set to premiere on Mac and iOS next week

The Longest Journey Remastered for iOS out now on the App Store worldwide
Nothing found :(
Try something else