The photo-based RadPad app has always made it easy to find a new apartment, condo, or home. Now, they have made it easier to pay your monthly rent as well. The service now accepts Apple Pay.

In the last few weeks, a number of new companies began accepting Apple’s mobile payment system, which was first introduced in October. These have included stores such as Winn-Dixie, BI-LO, Staples, Barclaycard, and PNC. The service could also soon make its debut in China thanks to a possible alliance between Apple and Alibaba.

See also: Square will accept Apple Pay beginning in 2015, Disney Store for iOS now lets you buy with Apple Pay on your iPhone 6 or iPhone 6 Plus, and Apple Pay could soon become the default alternative payment method for many. 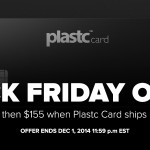 From Black Friday until Cyber Monday, you can order a Plastc banking card for free

Square will accept Apple Pay beginning in 2015
Nothing found :(
Try something else