You are using an outdated browser. Please upgrade your browser to improve your experience.
Apple Doomed Or Ready to Boom?
by Brent Dirks
February 3, 2015

Apple’s iOS 8 seems to be catching on at least a little more with users. As measured by the App Store yesterday on Monday, Feb. 2, 72 percent of devices were running iOS 8 with 25 percent using iOS 7. Only 3 percent of users were running an earlier version of iOS.

Those numbers were just posted to the Apple Developer Center support page. 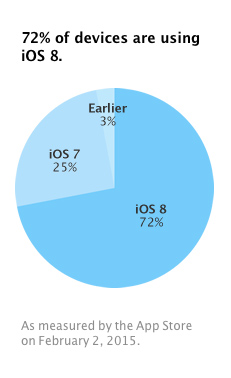 A look at the latest numbers.

That’s a 3 percent jump compared to the last check, which was in mid-January. After the busy holiday season, iOS 8 usage jumped from 64 to 68 percent. But those numbers trailed off during January, only seeing a 1 percent increase from Jan. 5 to Jan. 19.

One possible reason for the nice increase during the last two-week period was the introduction iOS 8.1.3, which arrived last week.

While only listed as a minor update, the software did contain a notable improvement. It reduced the amount of storage space needed on a device required to perform a software update.

The large amount of space needed on a device required to perform an over-the-air upgrade has been one theory on why iOS 8 adoption has been behind the curve. Even though you can upgrade via iTunes without needing any extra space, many users are more familiar with the over-the-air upgrade path.

Did iOS 8.1.3 finally get you to make the upgrade?

The next major version of iOS, version 8.2, has gone through a number of beta versions for registered developers. A report earlier today said it should arrive in March. And since that edition will be required to use Apple Watch, it could also help increase those adoption numbers.

Even so, that’s still pretty far behind the adoption rate of iOS 7. During the same timeframe in 2014, 85 percent of devices were running the latest version of iOS.

For other recent news, see: AppAdvice Daily: The best new apps and get Tubio for free, Realmac’s Typed is going from writing app to blogging platform in a new Indiegogo project, and Should you pull the plug on iPhoto for Mac?

Apple’s Luca Maestri is the most admired Fortune 500 CFO, according to a new survey

Here's our first look at Michael Fassbender and Seth Rogen as Apple's co-founding Steves
Nothing found :(
Try something else