You are using an outdated browser. Please upgrade your browser to improve your experience.
Accessories
by Brent Dirks
April 10, 2015

As you probably already guessed, those three options are designed to match the color schemes found on the new MacBook and latest iPhone and iPad models. 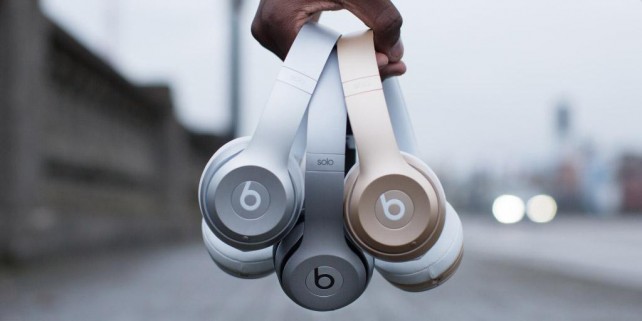 Originally unveiled back in November, the wireless Solo2 was the first product announced from Beats after being acquired by Apple for $3 billion in May 2014.

Thanks to Bluetooth technology, you can listen wirelessly to music up to 30 feet away from your device. The built-in battery lasts for up to 12 hours of playback before needing to be recharged. With the included cable, you can use the headphones without draining any battery power and also take handsfree calls with the built-in microphone.

The headphones retail for $299.95 and can be ordered now from Apple’s online site. The new colors should also be available at local Apple Stores soon. Buyers can also select from a red, white, or blue version of the wireless Solo2.

You can use Bluetooth headphones, like the Solo2 and others, to wirelessly connect to the upcoming Apple Watch and listen to music from the device’s on-board storage. Even though if you order one of the new Solo2 colors, the headphones will hopefully arrive long before any Apple Watch order.

For other recent accessory news, see: Mophie expands its Space Pack lineup with new options for the iPhone 6, iPhone 6 Plus and iPad mini, Grovemade unveils its beautiful and handcrafted Laptop Stand for any MacBook, and The new FLIR FX Wi-Fi camera takes on both Google’s Dropcam and GoPro.

Forget the spin, we don't yet know whether the Apple Watch is a success

Apple Watch preordering finally begins in the US, 8 other nations
Nothing found :(
Try something else