You are using an outdated browser. Please upgrade your browser to improve your experience.
Pocket Gaming
by Brent Dirks
April 22, 2015

Fans waiting for the arrival of The Room Three this spring will need to be a little more patient. Developer Fireproof Games, in a new Twitter post, said that the game is now schedule to arrive this summer.

Originally announced last fall, Fireproof said the third game in the series “promises to evolve the mysterious story and take puzzle solving to higher and weirder places than ever before.”

And while you’re waiting, both of the previous games – The Room and The Room Two – are available to download now on the App Store. The pictured Room Two is universal for the iPhone/iPod touch and iPad/iPad mini and will set you back $2.99.

An iPhone version, The Room Pocket, can be downloaded for free. An in-app purchase of $0.99 will unlock the entire game.

Both games combine elements of a mystery, puzzle, and hidden object game into one fun package. And The Room Three looks to continue that great tradition. I suspect it will be worth the wait.

For other app news today, see: Breaking, a great iOS 8 Notification Center widget, makes the move to the Apple Watch with a new update, Show your support this Earth Day with fun kids’ apps from Fingerprint, and The best fitness apps for Apple Watch include Argus, Fitlist, and Pocket Yoga. 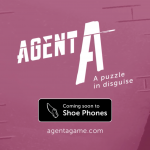 Agent A: A Puzzle in Disguise is an upcoming espionage game that's similar to The Room

Walking Dead, Limbo, Skullduggery and more go on sale for Halloween
Nothing found :(
Try something else