You are using an outdated browser. Please upgrade your browser to improve your experience.
Accessories
by Brent Dirks
April 10, 2015

But a Kickstarter project is bringing that idea to an actual iPhone case.

Mega Tiny Corp.’s Zero G Anti-Gravity case is available for both the iPhone 6 and iPhone 6 Plus. While the front of the case looks pretty normal, the back is where the magic happens. It is covered with the material that allows you to stick your phone to virtually any flat and smooth surface – like kitchen cabinets, glass, whiteboards, metal, tile, and even computer screens. 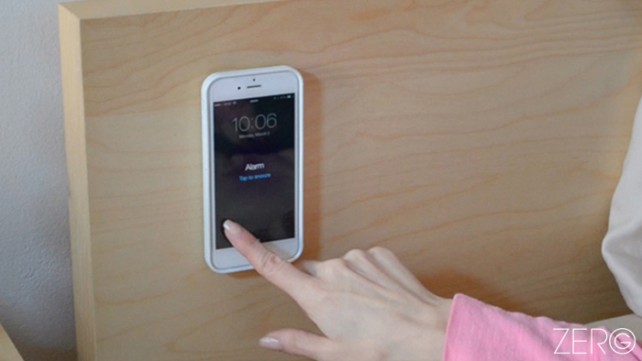 The case can easily stick to almost any flat, smooth surface.

I’ve been using a prototype of the final case for around a week and have really been impressed. Since I use an iPhone 6 Plus, I’ve found that slim cases are easily my favorite. And the Zero G adds just 3mm of thickness to the handset. Other nice features include a raised front edge to protect the screen and bottom cutouts that should fit any size of Lightning cable plug.

I’ll get the most important question out of the way first. The case definitely works as advertised. The material on the back of the case isn’t sticky to the touch, but gently press down on the case, and it will attach itself to any smooth surface. I tried it out in a number of situations, and the case stuck on firmly. Surprisingly, just a quick pull releases the nanosuction grip. There is no sticky residue left behind.

Easily my favorite way to use the case is sticking it on the bathroom mirror when I’m getting ready in the morning. It also gripped to my iMac’s screen perfectly. But the possibilities are pretty much endless – including taking the place of the much-maligned selfie stick.

There are a few caveats, though. It definitely won’t stick to any type of textured wall, I learned that the hard way. My phone was thankfully fine after dropping a few feet to the ground.

Also, the nanosuction material does attract some lint. It’s much less than I thought, but after a few days of use, it was covered with some dog hair and other pieces of material from my pocket. But a quick wipe with a wet cloth completely cleans any debris right off.

Right now, for a pledge of $39, you can snag a white or black Zero G case for your iPhone 6 or iPhone 6 Plus. The company will also throw in a full coverage tempered glass screen protector for either handset.

All pledge rewards are expected to ship in May. And with a little more than two week left to go on Kickstarter, the project has already easily exceeded its original $25,000 goal.

I was really impressed with the Zero G prototype case. While it’s probably not for everyone, the nanosuction really gives users a new level of functionality.

For other recent accessory news, see: Grovemade unveils its beautiful and handcrafted Laptop Stand for any MacBook, The new FLIR FX Wi-Fi camera takes on both Google’s Dropcam and GoPro, and Find your Safe Haven in the latest artist-designed UE Boom speaker.