You are using an outdated browser. Please upgrade your browser to improve your experience.
Apple's Software
by Brent Dirks
April 29, 2015 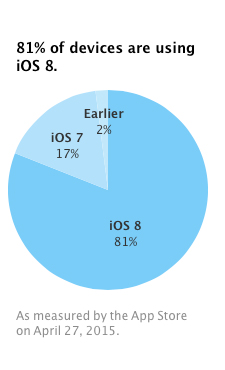 Those numbers were measured by the App Store earlier this week on Monday, April 27.

Two week ago, 79 percent of devices were running iOS 8.

Even so, iOS 8 adoption lags behind the same iOS 7 numbers from 2014. At the same time last year, 91 percent of devices were running that version of iOS.

The Apple Watch, which started arriving to customers last week, requires that users have iOS 8.2 or later on their iPhone.

Apple officially released the most recent version of the software, iOS 8.3, earlier this month with a long list of improvements. Along with a number of new Siri languages, it added a new racially diverse emoji, support for wireless CarPlay, and more.

And even though iOS 9 is widely expected to be announced at WWDC in June, Apple isn’t done improving iOS 8. Currently in beta testing by registered developers and members of the public program, iOS 8.4 is highlighted by a revamped music app. It’s official release date is unknown.

For other news today, see: You can soon order Apple products from your wrist, CEO shakeup at CurrentC consortium, and Popular Periscope app gets an update to show broadcast history. 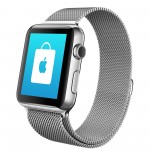 Apple Watch has its 'gate' -- 'tattoogate'
Nothing found :(
Try something else