You are using an outdated browser. Please upgrade your browser to improve your experience.
That iThingy You're Wearing
by Brent Dirks
May 27, 2015

Third-party apps on the Apple Watch are probably one of the biggest pain points on the new device. But Apple is on the road to making that situation a lot better.

During a discussion at the Code Conference, Apple’s Senior Vice President of Operations Jeff Williams confirmed that a native Apple Watch SDK will be previewed at WWDC 2015 early next month. That means we could see native Apple Watch apps arrive sometime this fall.

Williams said that the SDK would give developers access to the watch’s sensors, Digital Crown, and more. Currently, third-party Apple Watch apps are required to run on an iPhone with the information wirelessly transmitted to the watch. That extra step slows down the process and bogs down the experience. At least for me, loading some third-party apps can take up to 60 seconds, which is far from ideal. Native apps should be able to run even if your iPhone was out of range or suffering from a dead battery.

Allowing apps to run directly on the watch should also open up a new world of possibilities for developers.

For other recent news today, see: Google’s App Indexing speeds up switching to apps from Chrome and Google Search, Apple beats out Google to once again become the world’s most valuable brand, and Apple begins to send out official media invitations for the WWDC 2015 keynote on Monday, June 8.

Apple begins to send out official media invitations for the WWDC 2015 keynote on Monday, June 8 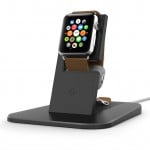 Review: Twelve South’s HiRise helps to protect your new Apple Watch while it is charging
Nothing found :(
Try something else