You are using an outdated browser. Please upgrade your browser to improve your experience.
Apple's Software
by Brent Dirks
July 8, 2015

First up, Apple has introduced a new two-factor authentication system in the software and the latest OS X El Capitan beta.

Apple explains more about how the new system works in a detailed support document:

Whenever you sign in with your Apple ID on a new device or browser, you will verify your identity by entering your password plus a six-digit verification code. The verification code will be displayed automatically on any Apple devices you are already signed in to that are running iOS 9 or OS X El Capitan. Just enter the code to complete sign in. If you don’t have an Apple device handy, you can receive the code on your phone via a text message or phone call instead.

Apple does currently have a two-factor authentication system available for users, but the new system is built directly into the software.

I’m glad to see Apple tweak and improve this important security feature. If you currently don’t have the feature enabled, I highly recommend you do it as soon as possible. Complete instructions can be found here. 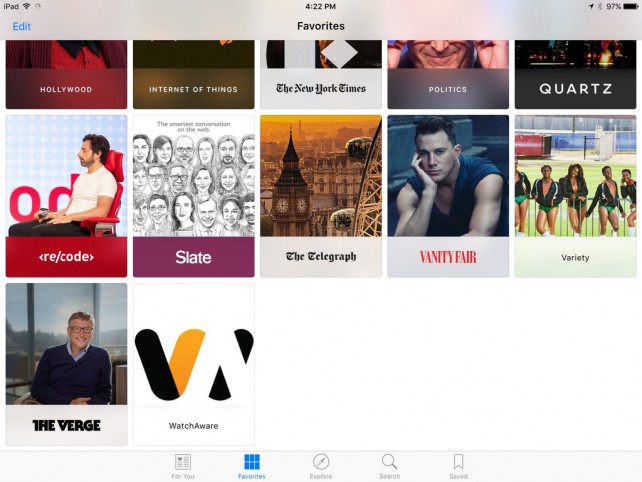 Apple News features stories based on a user’s specific interests.

The other major addition in the new iOS 9 beta is Apple News. Currently only available in the United States, the app showcases a detailed list of news stories based on your specific interests.

Another interesting change includes dedicated folders in the Photos app for selfies and screenshots.

Tablet owners should also be glad to hear that app folders on the iPad/iPad mini now show in a four-by-four arrangement instead of the previous three-by-three layout. That will let users quickly see more of their apps in a folder.

Originally introduced back at WWDC, both iOS 9 and OS X El Capitan should officially arrive sometime this fall. A public beta program should be unveiled this month.

For other news today, see: Tidal jumps on the bandwagon and finally offers a family plan, Spotify wants you to stop paying through the App Store, and How can Apple Watch help with self-regulated learning?

Apple Music, iOS 9 beta 3 finally arrive for developers
Nothing found :(
Try something else