You are using an outdated browser. Please upgrade your browser to improve your experience.
That iThingy You're Wearing
by Brent Dirks
August 21, 2015

In the near future, Apple Watch owners could make their devices a lot smarter without even needing to purchase a new watch.

According to a new report from Czech site Letem Svetem Apple, Apple is working on sensor-laden smart bands for the watch that could measure things like pulse oximetry, body temperature, blood pressure, and respiratory rate. The bands will supposedly be available to purchase starting in early 2016.

How they would work

The bands could even be used with the current-generation Apple Watch thanks to its built-in, but somewhat hidden, diagnostic port.

We already know that the port can add new features to the device. Third-party accessory maker ReserveStrap is using the port to provide a backup battery for the Apple Watch. It retails for $249 and can be preordered now with shipping expected later this year.

All of the mentioned sensors, the site says, need to be located on the strap instead of the Apple Watch itself to record accurate readings. As you probably know, the only sensor housed in the current model can measure a user’s heart rate.

Not coincidentally, Apple’s stock Health app can record all of those vital signs that the bands will supposedly monitor.

The smart strap rumor itself isn’t exactly new and originally popped up even before the Apple Watch arrived to the general public earlier this year.

Even though the report sounds interesting, it should be taken with a large grain of salt – for now. Letem Svetem Apple hasn’t been known for providing accurate information about future Apple products.

And while I think Apple would definitely like to increase the amount of health information that the watch can measure, I still don’t know if smart straps are truly the answer. Apple would be smarter to add the increased functionality to future generations of the watch itself.

For other news today, see: Samsung’s ‘Ultimate Test Drive’ is the ultimate gimmick, Game on, the leaderboard returns to Swarm by Foursquare, and Get your Giphy Cam and make hilarious GIFs. 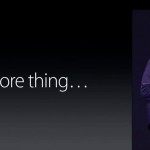