You are using an outdated browser. Please upgrade your browser to improve your experience.
Connected Theater
by Brent Dirks
September 11, 2015

Now that the significantly upgraded Apple TV has been unveiled, there seems be significant pent-up interest for the new fourth-generation device.

We still don’t know exactly when it will hit the market in October, but there seems to be a strong demand for the set-top box – at least from current owners.

Those are some significant numbers, and really not all that surprising. The third-generation model originally arrived back in 2012, and the box has been in dire need of a revamp for some time. And most Apple users, like myself, were probably very impressed with the new streaming video device.

Apps, and especially games, are a major focus of the new device. The remote can act as a controller for games, and you’ll also be able to use any MFi controller. Some of the games confirmed for the Apple TV include Guitar Hero Live, Crossy Road, and many others.

Another great new feature is interactive notifications in TV apps. For example, while watching a game via MLB.com at Bat, live notifications will pop up on the screen showing other important information around the league. Just like previous generations of the device, you will also be able to view your photos and listen to music – including the Apple Music subscription service.

There were will be two different versions available to purchase – a 32GB edition for $149 and a 64GB box for $199. The third-generation box will still be available for $69, but it won’t offer any of the new features.

If you’re interested in trading your second- or third-generation Apple TV into Gazelle for cash, visit here. 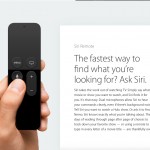