You are using an outdated browser. Please upgrade your browser to improve your experience.
Ads, Ads & More Ads
by Joe White
October 25, 2015

This weekend, Apple posted a handful of new advertisements for its recently launched iPhone 6s (and 6s Plus) handsets online, showcasing improvements to both Siri and the built-in Camera application.

So, what do the new ads bring? Well, first of all, Apple’s two new Siri ads (once again starring Jamie Foxx) highlight how users no longer need to press the Home button in order to activate the virtual personal assistant on the 6s handsets. The feature, which was added in iOS 9 and is available for the two new iPhones only, makes it possible to call on Siri using the "Hey Siri" command even when the device isn’t connected to power (though, as we noted recently, there are a few factors to be aware of). This, Apple explains, is made possible thanks to the M9 coprocessor, which also tracks users’ movements.

The third and final new ad, on the other hand, is a longer piece which deals with the improved Camera app and technology in the newer smartphones. It’s around a minute long, and goes through a series of new features added to the Camera application: Live Photos, support for 4K video, peek gestures, and more all make appearances in the advertisement. This ad, unlike the Siri advertisements, forms part of Apple’s "The only thing that’s changed is everything" campaign.

Earlier today, we also told you about a new, innovative use for the 6s handsets’ 3D Touch display. You see, one developer has created an app which allows users to find the relative weight of objects using the pressure-sensitive display. As our original article explained:

the app allows iPhone owners to place two objects side by side in order to gain a percentage of the plums’ weight relative to the display’s maximum force. It uses a private API in order to make the calculation, however, and as such we aren’t expecting the application to launch on Apple’s App Store. 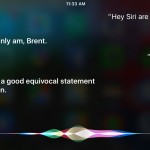 The iPhone 6s is listening for the ‘Hey Siri’ command, most of the time
Nothing found :(
Try something else