You are using an outdated browser. Please upgrade your browser to improve your experience.
iDevices
by Joe White
November 21, 2015

Here’s a staggering piece of data for you: according to a recent report, in the United States some 100 million iPhone handsets are now in use, with an impressive two-thirds of this figure being Apple’s most recent devices, the iPhone 6 or 6s models.

The data comes from Consumer Intelligence Research Partners (via MacRumors), and the emphasis on the report, as you’d expect, is on the sustained prominence of Apple’s newer smartphones in the United States. While the iPhone market in the U.S. indeed features a spread of different models, ranging all the way from the iPhone 6s Plus to the iPhone 5 and below (enigmatically marked on CIRP’s graph as “other”), 62 percent of these handsets were indeed either the iPhone 6, iPhone 6 Plus, iPhone 6s, or iPhone 6s Plus models. 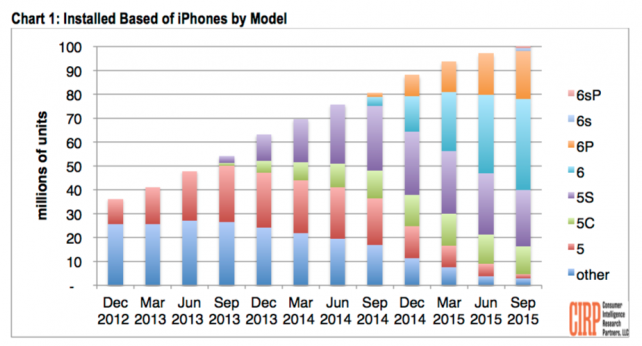 The analysis shows the continued strength of the iPhone 6 and 6 Plus, now one year old. We estimate a combined 60 million of these flagship phones sold in the US from the September 2014 launch through September 30, 2015. For comparison, the iPhone 5S sold about 28 million in the same period in 2013-2014. With only a weekend of availability in the quarter, we estimate 4 million of the new iPhone 6s and 6s Plus sold in the U.S.

As Levin notes, the iPhone 6s and 6s Plus models indeed had a single weekend of availability before CIRP’s data was collected, so don’t judge the four million market share too harshly. Indeed, as in previous years, we’d expect sales of the 6s and 6s Plus handsets to rocket as we approach Christmas and beyond.

At the last count, Apple’s smartphone market share in Asia had been boosted by the iPhone 6 and 6 Plus, with the bigger models impressing customers overseas. Despite Samsung originally pioneering the so-called “phablet” trend in this part of the world, Apple threatened the South Korean company’s market share in China, Japan, and South Korea.

In the United States, on the other hand, new iPhone purchases have been facilitated by Apple through its iPhone trade-in program, its iPhone upgrade program, and its Move to iOS application (for Android to iPhone switchers). It’ll be interesting to check on more concrete iPhone 6s and 6s Plus sales figures in the near future. 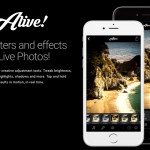 Take your Live Photos to a new level with Alive! 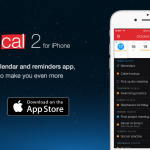 Fantastical adds enhanced support for 3D Touch with peek and pop events
Nothing found :(
Try something else