You are using an outdated browser. Please upgrade your browser to improve your experience.
Accessories
by Joe White
December 22, 2015

Here’s a treat for iPhone owners with a Lightning to USB Camera Adapter: under the recently released iOS 9.2, folks with an iPhone 5, 5s, 5c, 6, 6 Plus, 6s, or 6s Plus will be able to connect their smartphone up to a digital camera in order to import images right onto their handset.

Apple is indeed listing all iPhone models as compatible devices at the product page for its Lightning to USB Camera Adapter, and it seems compatibility for the adapter was added in iOS 9.2 (which launched for users earlier this month). Before now, the product had only worked with iPad models, which made sense in a way; the larger screen of Apple’s tablet made it more of a suitable device for handling large numbers of imported images, making edits, and ordering prints. The release of more powerful, larger-screened iPhones in recent years, however, makes Apple’s smartphone more of a capable device for photographers, and as such it’s great to see support for the iPhone added to its adapter.

The adapter works by allowing users to plug a USB cable connected to their DSLR camera into their iOS device; in this way, users can transfer images over to iOS without having to remove an SD card.

Earlier this month, Apple made a change to its Lightning to SD Card Camera Reader especially for iPad Pro owners: Cupertino replaced the cable with a brand new device capable of transferring data at USB 3.0 speeds. The iPad Pro includes a USB 3.0-compatible Lightning adapter, and as such, the improved Lightning to SD Card Camera Reader would allow users to transfer data at 10 times the rate previously possible.

According to 9to5mac, however, it seems the updated Lightning to USB Camera Adapter doesn’t support USB 3.0 speeds for iPad Pro owners. This is too bad, but we’re nevertheless pleased to see iPhone compatibility added to the accessory (even if iPad Pro owners are still limited to USB 2.0 speeds).

You can order the new Lightning to USB Camera Adapter now from Apple, and it carries a price tag of $29.00. In order to connect an iPhone handset to the cable, you’ll need to have iOS 9.2 (which is available now inside of Software Update) installed. 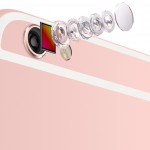 A new comparison looks at the camera of the iPhone 6s
Nothing found :(
Try something else