You are using an outdated browser. Please upgrade your browser to improve your experience.
Apple's Ups & Downs
by Joe White
December 31, 2015

In a new note to investors, Brean Capital analyst Ananda Baruah has continued to praise the value of Apple shares, maintaining the same target price and reminding investors of the “longterm” success of the iPhone. In short, despite Wall Street qualms surrounding Apple stock, Brean Capital’s advice remains the same: that, essentially, investors should continue to invest in the Cupertino-based company.

Baruah maintained his same target price for Apple stock, that is a figure of $170. Do remember that Apple stock has operated on a 7-for-1 split since June 2014, and at that time, prices for individual shares started at $92.22.

In the note, which was provided to AppleInsider, Brean Capital’s Baruah said that this target price remains sound despite Apple’s “noisy” supply chain, and regardless of the “materially low” expectations Wall Street has for the company through 2017.

You see, the analyst predicts iPhone growth of more than five percent, despite Wall Street’s expectation that iPhone shipments will slip between three and five percent. The reason for the continued success of the iPhone, Baruah notes, is the forthcoming four-inch device: Apple’s “iPhone 6c.”

This long-rumored four-inch iPhone is a “done deal,” according to the analyst, and it’ll be hitting store shelves in 2016. It’s the main reason Apple is expected to see continued growth throughout the year, thereby justifying the $170 target price. Most recently, we heard that this “iPhone 6c” is expected to offer a bigger battery, Touch ID, and an A9 chip.

Specifically, Baruah believes Apple shipped about 233 million iPhone units in calendar year 2015, which he sees growing to about 250 million in 2016. He sees Apple’s sales being boosted next year by the debut of a new 4-inch iPhone, which he believes could provide as many as 30 million incremental units to the year if it launches in the March-to-April timeframe.

Naturally, this is all going to impact on Apple’s stock and the company’s continued success. As we’ve said before, a four-inch iPhone would be a smart move for the company to make, provided the device has the power to keep up with at least a handful of future iOS releases.

An “iPhone 7,” “Apple Watch 2,” and an updated line of iPads are also expected to reach Apple Store shelves in 2016. With all this planned, Apple stock is surely a sound bet. 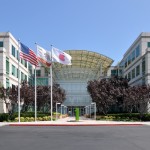 Apple stock price falls below $100
Nothing found :(
Try something else