You are using an outdated browser. Please upgrade your browser to improve your experience.
The World Around You
by Brent Dirks
December 10, 2015

One of my favorite weather apps, Storm, has just added a number of new features with a recent update. 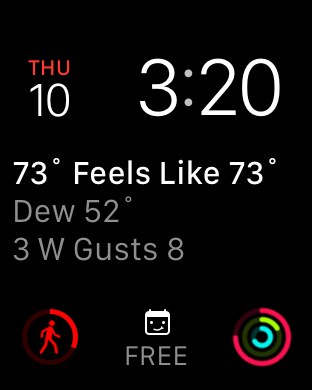 While the app arrived on the Apple Watch with an update in October, version 1.6 brings a nice complication for a number of watch faces. As you can see, along with the temperature and dew point, you can also view the wind information at your location.

Here’s an interactive preview of the app itself from our sister site WatchAware. 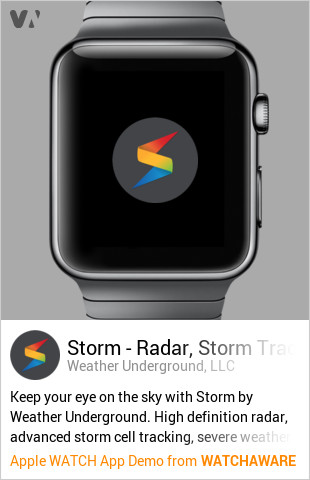 And the improvements don’t stop there. Users can now select a new light theme instead of the usual darker visual style. An experimental new radar layer will also show the storm activity worldwide.

Speaking of the radar, the past information now animates more smoothly when dragging your finger along the timeline.

Weather fans, at least in the United States, can also view technical National Weather Service discussions. Finally, users can also make the app better by reporting hazards – like a power outage or flood – at their location that can be viewed by others.

Storm is designed for the iPhone/iPod touch and all iPad models. It can be downloaded now on the App Store for free. With a yearly subscription of $1.99, you can view the app without any advertisements.

I’ve been using Storm since it arrived earlier this year and continue to be impressed with the work the Weather Underground has done on the app.

If you’re looking for a huge amount of weather data in one place, Storm should definitely be up your alley.

The high-resolution radar gives users animations of the past, present, and future storm activity. You can also select the nearest radar site to your location and receive more detailed reports on a storm. With the storm tracks feature, the app will give you a detailed analysis of any upcoming storm headed in your direction with information like the precipitation rate and more. You can also be notified about rain or lightning near your location.

For other app news today, see: Product Hunt’s iOS app gets a mammoth update, Video Editor by MoonLight provides fast and easy editing, and Protect the waters, the sucking Spunge Invaders have arrived.