You are using an outdated browser. Please upgrade your browser to improve your experience.
Accessories
by Brent Dirks
January 27, 2016

It might be finally time to cut another cord in your life – and we’re not talking about canceling cable. The latest rumors regarding Apple’s next-generation iPhone are interesting to say the least. In a quest to make the handset even thinner, Apple is apparently planning to make the “iPhone 7” without the venerable 3.5mm headphone jack. That means you’ll need to use special headphones with a Lightning plug or a wireless Bluetooth option.

Headphones with a Lightning interface are still few and far between, but there are thankfully a great number of Bluetooth options to select from.

Along with an iPhone or iPad, wireless headphones can also be used with other Apple products – including the Apple Watch and new Apple TV. With the wearable device, you can load music and listen to tunes while out on a run while leaving your iPhone at home. After pairing headphones to the streaming video device, you can watch video quietly without disturbing everyone in your house.

Here are six great options to take a look at. 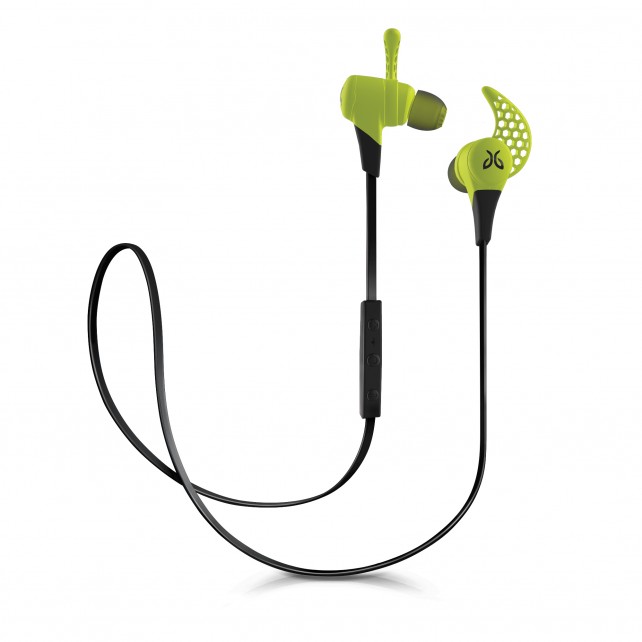 JayBird’s X2 Sport Wireless Headphones provide a nice combination of wireless portability and great sound. Thanks to a number of included earbuds and ear fins, you’ll definitely be able to find the most comfortable fit and best option that will stay in your ears no matter what.

Weighing just a little more than 9 ounces, the built-in battery can provide up to eight hours of music playback before needing to be recharged. JayBird even provides a lifetime warranty against sweat, so the earbuds are perfect for a run or workout.

You can select from six different color combinations. 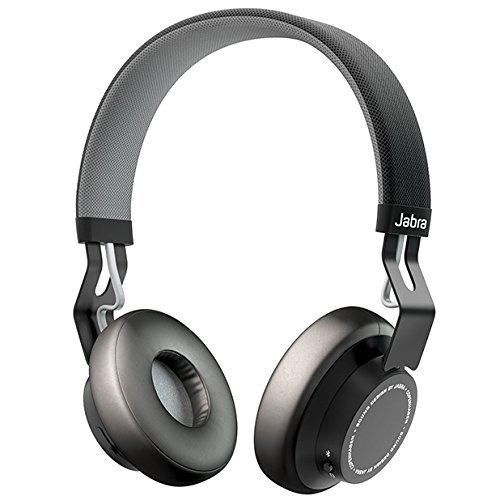 You can find Bluetooth headphones in pretty much any price range, but the Jabra Move offers a nice overall feature set for a reasonable price.

The lightweight headphones sport an adjustable headband that can fit pretty much any type of head, and the fabric is designed to resist dirt. The battery can provide up to eight hours of music and 12 days of standby before needing to be recharged.

Along with being compatible with any Bluetooth device like an iPhone or iPad, an included 3.5mm cord will allow you to use the headphones even if the battery is dead.

Buyers can select from a black, red, or blue version. 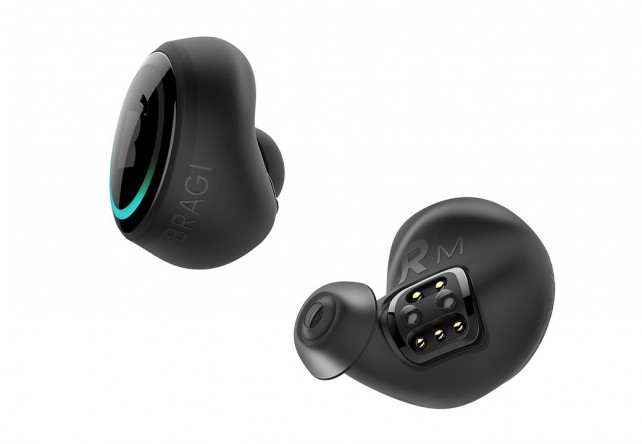 These headphones truly cut the cord. The Dash is composed of two small earphones that can be inserted in each ear. Thanks to built-in storage, you can load up to 1,000 songs to listen to without needing an iOS device. Since there are no wires, you can control the music with special touch-sensitive controls. When working out, the Dash can give you live audio feedback including duration, heart rate, and number of steps taken. With a built-in microphone, you can also take handsfree phone calls.

The battery lasts for up to three hours of usage, and the included charging case can recharge the device up to five times on the go.

You can select from a black or white version. Any current orders are slated to ship sometime next month. 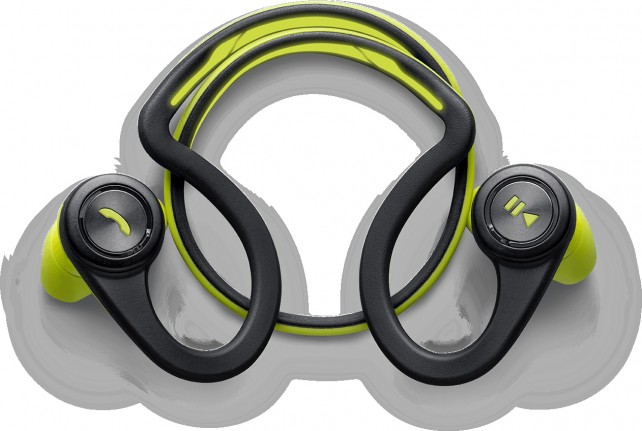 Worn around the back of your neck, the Plantronics BackBeat Fit is also perfect for exercise. Protected against sweat and other hazards, the headphones can provide up to eight hours of music before needing to be recharged. When they are away from the phone, a special power-saving mode can keep the headphones charged for up to six months. The special earbud design directs audio into your ear but also allows wearers to hear a bit of their surroundings for extra safety. You can also take handsfree phone calls.

The device is available in either green or blue. As a nice touch, Plantronics also includes an armband for your iPhone. 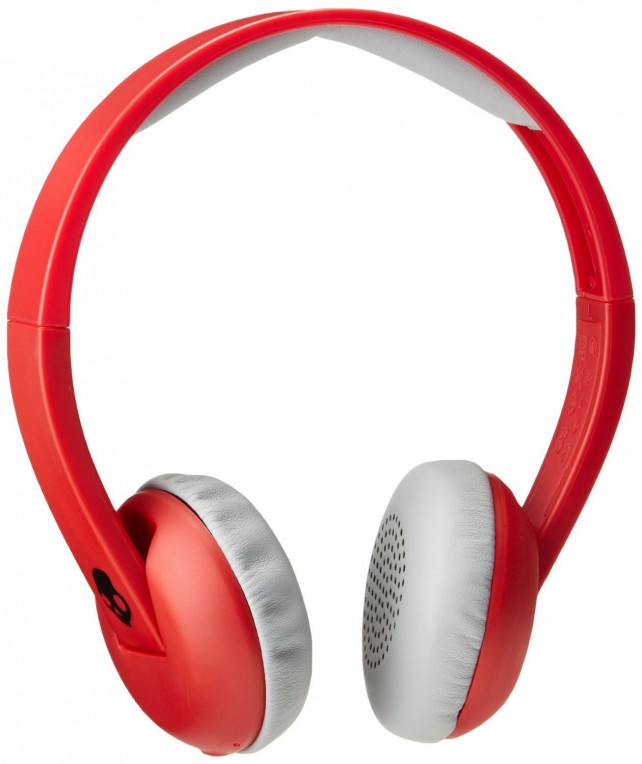 A budget-conscious choice, Skullcandy’s on-ear headphones features soft ear pillows for maximum comfort. The built-in battery can go for up to 10 hours before needing to be recharged. There’s also an on-board microphone for handsfree phone calls and a remote to control the music. Just to note, unlike other more expensive versions, the Uproar Wireless doesn’t include any type of conventional 3.5mm jack. So when the battery dies, your music will go along with with.

There are five different color combinations to select from. 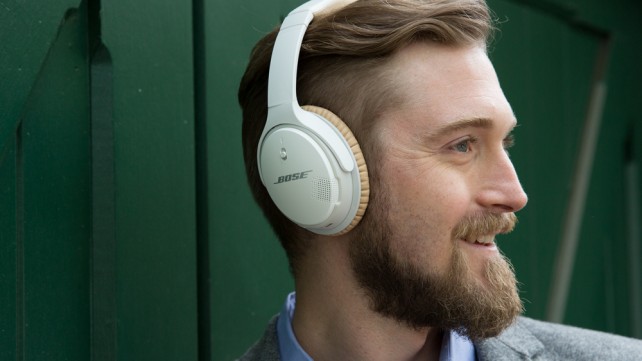 Bose has always been well known for its high-quality headphones, and the SoundLink Around-Ear II looks to continue that tradition. A special microphone system with adaptive audio adjustment is designed to provide clear handsfree phone calls. You can rock out for up to 15 hours of music playback using the built-in battery. Users can also connect to two different devices simultaneously, meaning you can watch a movie on your iPad and also be automatically connected to any calls on your iPhone.

You can choose from a black or white version. 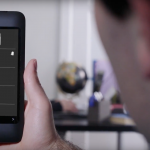 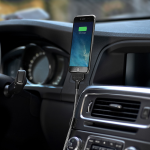