You are using an outdated browser. Please upgrade your browser to improve your experience.
Accessories
by Joe White
January 4, 2016

Brydge, the folks behind a range of keyboard cases for Apple’s line of iPads, have launched two new products at CES: the cases, designed for the iPad Pro and iPad mini 4, are much like Brydge’s previous cases in that they add a distinctive “MacBook” feel to an enclosed tablet computer.

The device for Apple’s larger tablet, aptly called BrydgePro, is the closest Brydge has come to turning a tablet computer into a MacBook look-alike. You can preorder the device online now, and it retails for $189; unlike the Smart Connector-reliant Smart Keyboard for iPad Pro, the BrydgePro requires a Bluetooth 4.0 connection and it’s powered by built-in, rechargeable three-month batteries. It is, however, possible to angle the iPad Pro’s display when it’s housed inside of BrydgePro, allowing for multiple viewing angles (something Apple’s Smart Keyboard doesn’t offer).

BrydgePro for the iPad Pro.

Another difference between BrydgePro and Apple’s Smart Keyboard is that Brydge’s case features a fully backlit keyboard. This doesn’t impact on the accessory’s form factor as much as you’d think, mind you: the combined weight of a BrydgePro-equipped iPad Pro weighs less than a MacBook Air, providing “the ultimate in mobile productivity,” according to the folks behind the product.

I’ve used and reviewed a number of iPad keyboard cases before, including Belkin’s Ultimate Keyboard Case for the iPad Air and perhaps the most similar keyboard case to Brydge’s products line, the ClamCase (which has since been acquired by Incipio). What I’ve found in the past is that these clamshell cases, while effective for typing, turn the iPad into less of a mobile device and more of a laptop computer. Apple’s Smart Keyboard makes it easy to quickly detach the iPad Pro from its casing, yet devices like the BrydgePro make this kind of move more problematic. It’ll be interesting to see how the new product from Brydge stacks up against competitors on the market.

The iPad Pro case isn’t all Brydge is bringing to the table, though: instead, a further case designed for the iPad mini 4, called the BrydgeMini, is also available to preorder. This retails for $99 online, and offers a smaller-sized keyboard designed to work alongside the 7.9-inch iPad. Though the keyboard is indeed smaller, it’s nevertheless backlit, making it easier for users to type in low-light conditions.

BrydgeMini for the iPad mini 4.

Both products are available in Silver, Gold, and Space Gray, and each one can be preordered online now (with shipping pencilled in for April this year). Furthermore, the first 1,000 customers to preorder a BrydgePro will also receive a Leather Carry Case from Brydge worth $99. 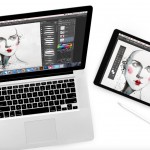 Turn any iPad Pro into a professional graphics tablet with the updated Astropad
Nothing found :(
Try something else